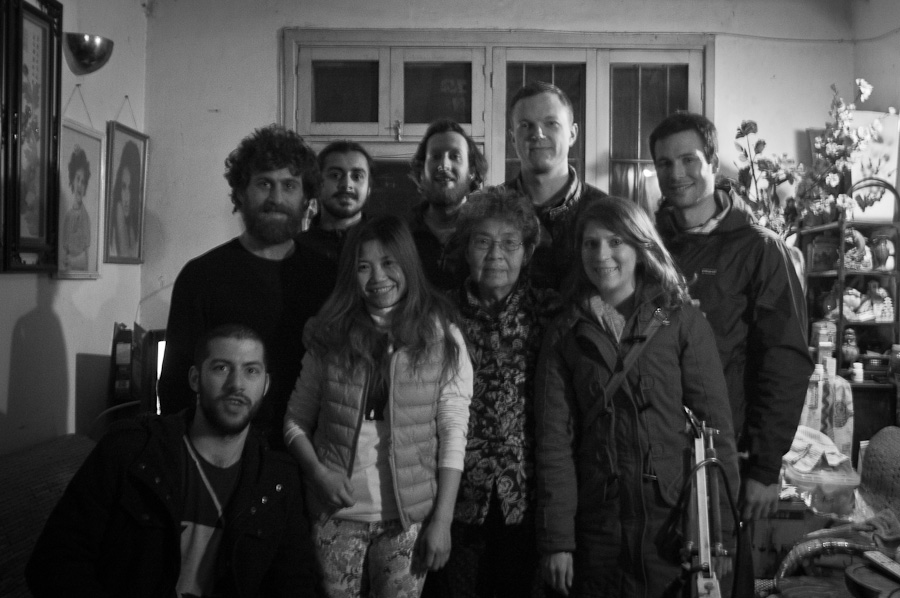 [dropcap]C[/dropcap]hinese New Year, which started two days ago, is far and away the biggest holiday in China. At this time every year, China’s major cities clear out as everyone returns to their hometowns to spend the week with their family (surprise: almost no one in major Chinese cities in actually from them).

This year the Natooke Bros. Larry and Jacob organized a dinner on the first day of the new year with an elderly friend and frequent visitor to their shop who they affectionately call Nainai (??, “Grandma” in Chinese). She’s a 73 year old college educated physicist (a member of the Chinese elite in decades past) and she has a son who long ago emigrated to Switzerland where he now lives. Tragically, Nainai has little contact with her family, who have provided housing for her but otherwise neglect her as she longs for company. She frequently wanders into the bike shop, chatting with Jacob and Larry or with whatever patrons are present (even if they don’t speak Chinese – and Nainai does not speak English). The photo above is of Greg, Larry, Mandeep, Angel, Dan, Nainai, me, Rachel, and Justin.

Larry, Mandeep, and Dan worked hard to prepare a table full of Chinese food which we ate together, along with Baijiu which which passed around the table until the plastic water bottle container was fully depleted. Surrounded by an incredible amount of clutter in a small apartment, crowded around a small table, we chatted about everything Chinese, from food to history. Nainai cursed Mao Zedong and celebrated America as a center for innovation. She kept forgetting my name but remembered that I worked in the tech industry, so she came to calling me g?o k? jì (???), which means technology in Chinese.

Nainai paints and draws portraits, often of celebrities like Elvis and Clark Gable, which hang on the wall in her apartment. (In the photo above, you can see two of them in the top left corner). She created a portrait of an obscure American politician from decades ago (whose name I cannot recall) and expressed her desire to have her portrait hanging on this persons wall. “If his family has it and it’s on his wall, it will have been worth it. I’m old and will die soon”, she’d say. She would routinely go out of her way to remind herself and us that she was old and worthy of pity, despite our constant assurances she was overreacting.

After one such exchange, I spontaneously drew an encouraging line out of the air: perhaps your greatest day is yet to come (????????????). Her eyes watered and she waved her arms and carefully rose to her feet to say thank you.

I miss my family just as Nainai misses hers. It was good to be able to pass some of the time together, offering each other the holiday comfort of a family meal. I think I’ll have fond memories of this Chinese New Year. I’m printing out the photo above and giving it to Nainai as a gift to say thank you.