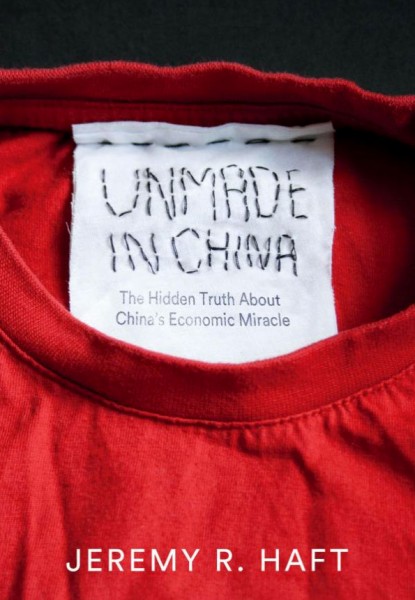 Note: you can read my highlights from Unmade in China here.

The subtitle of this book is: The Hidden Truth about China’s Economic Miracle and what it implies is that China’s economic rise is not what it appears to be. This is an idea that I have quietly held inside my head for most of the last decade, based on the things that I have seen. Things which do not match with the rising global superpower narrative that is continuously present in international media.

I sought this book out to educate myself on the things that I have yet to fully grasp about China’s economy, specifically the manufacturing sector which been its engine.

Economists do a lot of forecasting and economic analysis on China’s economy, but making predictions is difficult because of the opaque nature of China’s economy. According to the author of this book, entrepreneur and Georgetown University business professor Jeremy Haft, we can ascertain a lot by carefully looking at how things are made in China. From shirts to toys, apple juice to oil rigs, there are tell-tale signs that contradict the commonly-held view that China is going to take over the world in the twenty-first century. In the words of the author:

“From the inside looking out, China is not a manufacturing juggernaut. It’s a Lilliputian. Nor is it a killer of American jobs. It’s a huge job creator. Rising China is importing goods from America in such volume that millions of U.S. jobs are sustained through Chinese trade and investment.”

A good indicator of how much I learn from a book can be made by how many highlights I leave in the book: there were 86 highlighted passages in Unmade in China. It is filled with fascinating information which was new to me.

“Things fall apart. So the science of making things is to minimize risk. Of course, risk can’t ever be completely eliminated. But you strive to achieve a successful outcome again and again, reliably, not randomly, as often as possible. An airplane that flies. A bridge that holds firm. A medicine that cures, not kills. China is deceptive that way. It looks like a manufacturing powerhouse until you draw back the curtain. Then, you see risk everywhere.”

“Exploring China’s secret supply chain is the only way to get a clear picture of China’s competitiveness. For when it comes to accurate economic data, China is a black box. Its official metrics are highly unreliable, partly because they’re politically motivated and partly because comprehensive research on any given topic in China is either rare or non-existent. So the aggregate data are untrustworthy, and the small case studies are misleading. That’s why China’s own government officials disregard measurements of China’s economic size, trade volume, and exports as untrustworthy. Yet US academics, media, and politicians swallow these false numbers whole and regurgitate them as fact. A lack of good economic data has contributed to our China myopia. China looms much larger in the world because we are looking at it through a false lens.”

“Back in the 1970s and 1980s, when America was gripped with another fit of “Chicken Littleism,” the Great Japanese Menace was going to steal American jobs, sap American competitiveness, and take over the world. During those days, Japanese companies were actually doing some very innovative things, including figuring out ways to reduce risk in manufacturing. They designed quality control systems that would be the basis for what would become known as Six Sigma – procedures that were later adopted by the likes of General Electric and Pfizer. In a salute to Japanese corporate know-how, American companies often tried to imitate Japanese business practice – in management style, quality control methods, and even rituals like standing in meetings, to keep them short. I don’t know of a single company that tries to imitate Chinese business practice.”

“Since state-owned companies are legacies of China’s old command economy, in which the factors of production were controlled, managers are acclimated to this way of doing business. If you ask the manager of a large state-owned firm how the year went, you will usually hear, We had a great year. We produced 10 million tons of output. But that’s beside the point for competitive modern companies. The key metric is sales. How much product did you move? How many reorders? How much profit? Were your customers happy? It’s quite rare in China, especially among state-owned firms, to hear this kind of analysis. They act as government-backed budget spenders, not market competitors.”

“Remember that China is not, as is often presumed, a capitalist economy with an autocratic regime. It’s a hybrid economy, part communist, part capitalist. In China, they call it Chinese socialism, or capitalism with Chinese characteristics. What has resulted from this belt-and-suspenders economy is a situation where descendants of Mao’s original state-owned firms exist alongside hundreds of thousands of small and mid-sized nonstate-owned firms.”

Like another book I read a few years ago, Why China Will Never Rule the World, is about dispelling widely-believed China myths. Three of those myths are central themes in the book. I have included those here, along with the author’s opinion on each. The author makes a much more comprehensive argument in the book, but for the sake of brevity I have included the parts which were most interesting to me.

Myth #1: China’s economy is about to surpass the U.S.

“China’s GDP numbers are fiction, and GDP is the wrong metric to judge the true size and dynamics of China’s economy. The same goes with China’s famously red-hot economic growth. Like China’s trumped-up GDP statistics, its growth metrics are also fictional. The numbers from the provinces year after year outstrip the growth rate of the whole country. For example, in April of 2013, when all of China’s 31 provincial governments released GDP growth rates, none was lower than the national GDP growth rate – a statistical impossibility. The sum of the parts can’t be growing faster than the whole. Yet most US economists just lap up these growth numbers as proof that China is about to overtake us.”

Myth #2: Everything is “Made in China”

“iPhones, on the whole, aren’t manufactured in China; they’re just assembled there. China, in fact, adds only a smidgen of value to each iPhone it assembles. So while an iPhone costs about US $ 179 to make, China contributes only US $ 6.50 worth of value in putting together the parts that are made elsewhere. But because China is the last country to export the iPhone to the United States, trade statistics consider it as 100 percent Chinese-made!”

Myth #3: China is Killing US Manufacturing

“Even as American manufacturing employment has, by and large, been declining from its peak in 1979, the total value of US manufacturing has been trending upwards. With productivity gains – driven by advances in manufacturing technology – we are able to produce more with fewer workers. In the United States, for example, “97,000 steelworkers produced 9.5% more steel in 2011 than 400,000 workers did in 1980,” according to the Center for Innovative Media at George Washington University. 44 As Chinese firms acquire better technology, they are shedding workers, too.”

If you have interest in seeing the other side of the “China story”, I highly recommend reading this. I have little interest in manufacturing as an industry, but am filled with enthusiasm for untangling the wires when it comes to understanding what is happening in China. That is what Unmade in China is about.

After reading this book I look at international news about China a little bit differently, noticing many of the effects that Haft describes. In particular, politicians and media reporting figures which countless economists around the world agree cannot possible be true, yet are routinely reported as unquestioned fact. Politicians and the media have an interest in distorting and exaggerating the power and influence on the horizon.

Debate and discussion about the truth at the center of China’s economy has become a bigger topic of discussion recently, as the yuan has lost significant value and China has released annual GDP figures. It seems certain that in 2016 they will escalate rhetoric surrounding China and its influence on the United States as they rally people around false issues like Apple bringing manufacturing back to the United States (it won’t and it shouldn’t).

Unmade in China on Amazon