I arrived in Holland yesterday morning after a 17 hour flight from China. I drank coffee all day to stay awake during the day but decided that I couldn’t miss the opportunity to go to a legendary Amsterdam club since it was Saturday night.

That club is called Trouw, built out of an old Dutch newspaper factory in East Amsterdam. Last night Minilogue, Swedish techno duo, were performing there before next playing in Tokyo.

After visiting Trouw and seeing Minilogue I emailed Nemo and he sent me the Youtube links below which introduce them both. They’re below, too. All of this was new to me until yesterday.

Whenever I visit a new international super club I always measure it against the super club that I first developed my DJ senses in: Nation in Washington DC, which hosted Buzz . In contrast to Nation, Trouw is singularly focused on techno music. From when patrons begin to come in the club at 10pm until the crowd thins at 5am, techno music pounds through each of the two massive industrial areas of music.

Trouw featured on Slices, including a lot of beautiful footage of the space:

Before yesterday I had never heard of Swedish techno producers Minilogue. They made enough of an impression to be unforgettable though, on stage surrounded by an amazing amount of live production equipment with wires running everywhere. They begun playing at 2:30am in the industrial basement room of Trouw.

Their stage setup didn’t look too far away from the image below, taken in their Swedish studio. 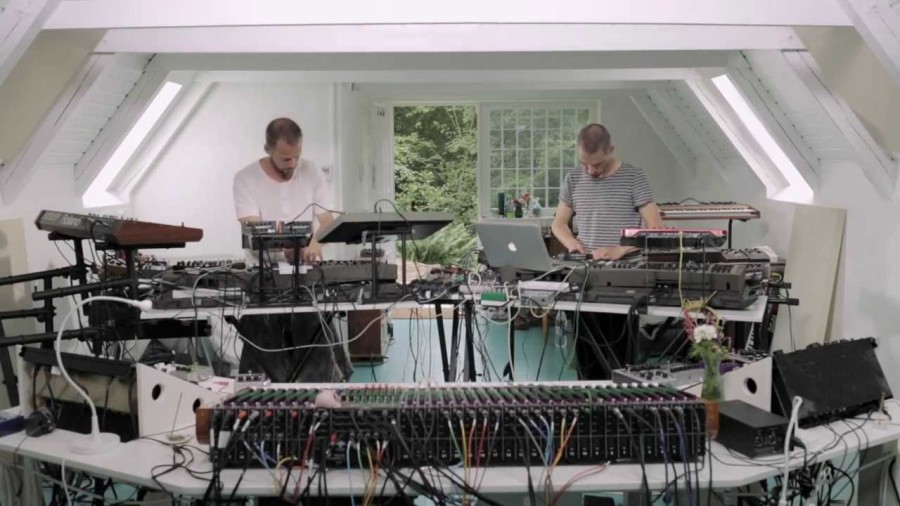 Their music is described by them as “hypnotic” and it is certainly that. Being a techno novice, their entire set sounds like a single 2-hour long song to me with subtle twists and turns in long, smooth movements.