I’ve been checking Reddit daily for at least 4 years. Around the time that Justin registered r/chengdu was when I started using the site. It’s come to be one of my favorite websites – maybe my favorite, because of the sheer depth that it offers. I could only compare that depth to something like Wikipedia. From r/oldschoolcool to r/todayilearned, there is an ocean of content which spans the spectrum of human knowledge and foolishness.

So I was overjoyed yesterday when a post that I submitted not only hit the front page of Reddit, but was the top post on the website. According to Alexa, Reddit is the #6 most trafficked website on the internet (#4 in USA) and gets about 500 million monthly visitors. The scale is enormous, so it can be difficult to get traction for even things which I consider very good.

I’ve posted articles, photos, podcast episodes and more on Reddit, and only had two submissions get over 1,000 votes. The post yesterday which made the front page has, as of publishing this post, 33k upvotes and 850+ comments.

It was a post in the Rick & Morty subreddit, r/rickandmorty, where I took a photo while purchasing the limited-edition “Szechuan Sauce” as it became available here in China. It’s deeply ironic that this “Szechuan Sauce” carries this title here in Chengdu, the heart of Sichuan. But Rick & Morty isn’t known here at all, let alone popular. So the granddaddy of meme sauces is interpreted in incredibly bizarre fashion, as if it were a knockoff.

As you can see, it is a Pulp Fiction reference. Specifically the scene at the beginning of the movie where Vince is explaining to Jules what they call a Quarter Pounder in France. Here there is a similar disconnect, because this sauce actually has nothing to do with Sichuan. This is plainly obvious to anyone in China when trying the sauce, so the Rick & Morty inside joke reference would fall flat here. That is how we get Internet Famous Dipping Sauce. 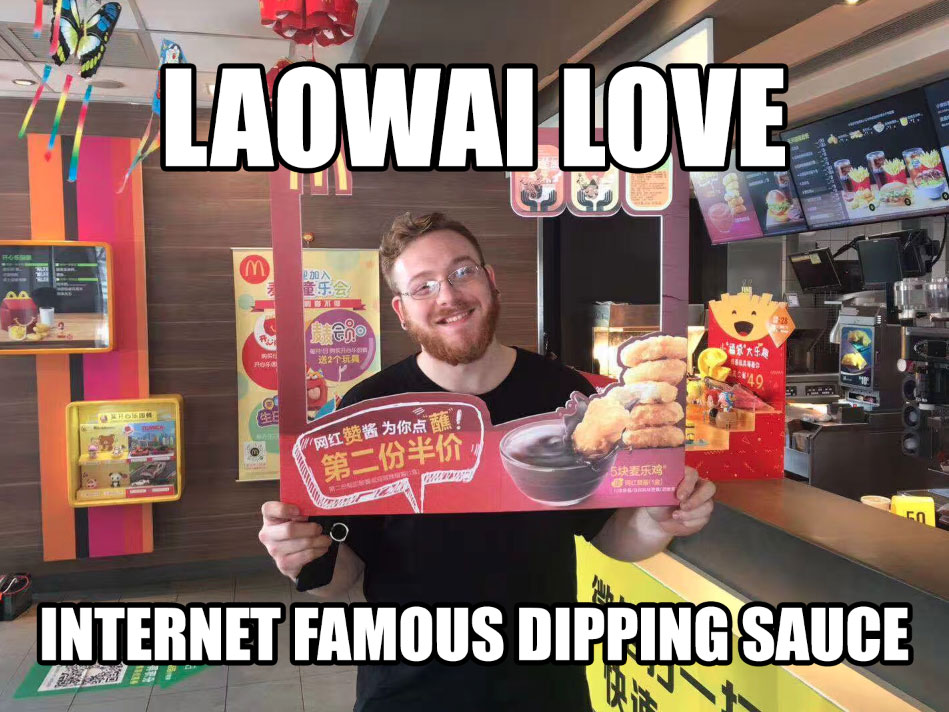 Of course, I wasn’t the only one in China excited about this. Actually, I was swept into this craze just as it arrived in China and the foreigner community here exploded with excitement on WeChat. We got a good meme out of it, based on a photo that was taken and shared by a South African expat in Chengdu who eagerly went to McDonalds in the morning, tried the sauce, and shared the photo. People were so eager about this Rick & Morty sauce being available here in China that it side-tracked a number of WeChat groups that I’m in.

The internet points (karma) on Reddit obviously means nothing. But it feels great to contribute something to the site which has offered me so much over the years.