Maxing Out Dropbox: 22gb for Free

I just upgraded my Dropbox account to 22gb for free! There were a few steps involved but here’s what I did.

The last few months I’ve become more and more of a regular user of Dropbox – moving essentially all of my important files into folders which are automatically synced with the cloud. Although I have two computers which I switch between regularly (a desktop PC and a Macbook Pro), the main benefit of this system for me is having everything constantly backed-up and accessible from any location via web browser.

The only issue for me was the 2gb initial limitation (which can be upgraded to 50gb for an annual fee of $99). However, there is a way around this which I discovered via this Lifehacker post on the subject. It involves using Google Adwords credit to create referral links to Dropbox, hence maxing out the referral bonus that Dropbox offers. Since I had just received a $100 credit for Google Adwords, I used that and ended up using $48 of that credit to get 300+ clicks which maxed out my Dropbox referrals.

Upon creating my first Adwords campaign, my account was suspended within a day. The message that I received was automated and didn’t tell me what rules I had violated. Here’s the exact email that I received: This was concerning because I figured that it would be difficult to get the help of a human to remove the suspension of my account. After getting suspended, I googled this and found that other people who ran the same Dropbox campaign had their accounts suspended and the appeals process was fruitless for them, resulting in a permanently disabled Adwords account (which is automatically tied to your Google account since Adwords is a Google product).

I got really lucky. I sent an email and got a friendly reply within one day that my account had been restored and that my ad was running.

The idea with the Adwords campaign is this: keep your ad running as long as it takes to maximize your Dropbox referrals and then shut it off. Once you get to that point you’re finished, and you can enjoy your 20gb+ of free space on Dropbox forever. Here’s what it took to get me to that point:

As you can see above, I “paid” an average of $0.13 per click, of which there were 365, to get 30+ referrals in Dropbox. Totally worth it and interesting to see the whole process take place. Here’s what the referrals in Dropbox looked like (this is one of several pages): 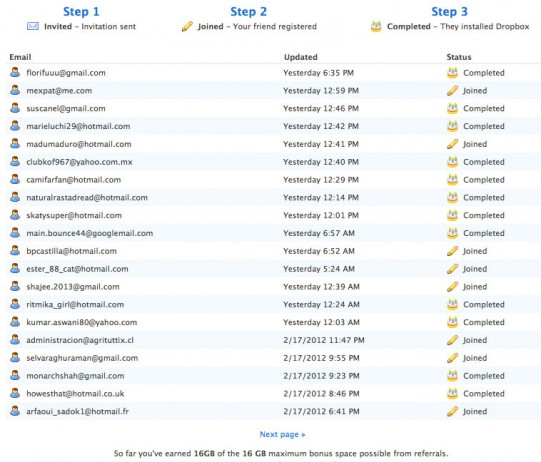 Although there was a potentially major hiccup when my Adwords account was suspended, I overcame that hurdle and it was totally worth it. And if you do what I did, I’m sure that you can max your Dropbox account out as well and get the maximum of 20gb+ of free online storage space. Of course with Dropbox, the key is that this data is automatically synced with the cloud and your other computers.

Although I have nothing else to gain by referring you to the service (ha ha), Dropbox is fantastic and I highly recommend it!