Last month I did a concise roundup of ten mobile games from January 2016 and this month I have done the same with ten games from this month. Below are links to each of the games on the iTunes App Store along with a brief description, and a single recommended game at the very bottom.

Note: Most of the games below are free to play, which means it’s easy to try them out. If you find one you like, it’s worth paying $0.99 to turn off ads, because they can often become very distracting.

If you’re looking for more recommendations, check out my roundup of 80+ mobile games for the year of 2015. 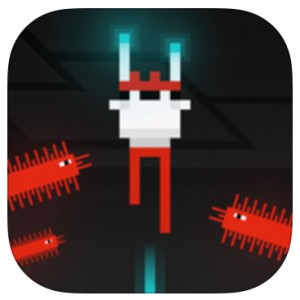 HoPiKo is my favorite new game I played this month which is, as of the date this was published, still the free app of the week on the App Store. The trend that I notice is that for-pay games tend to be the ones that I stick with for a long time because they tend to the upsell initiative and just focus on stellar gameplay.

HoPiKo is difficult but is well-polished. The gameplay is fresh and satisfying and charmingly references retro games not only in its presentation but in its narrative. This type of gaming have a narrative at all is conventional but it manages to pull it off.