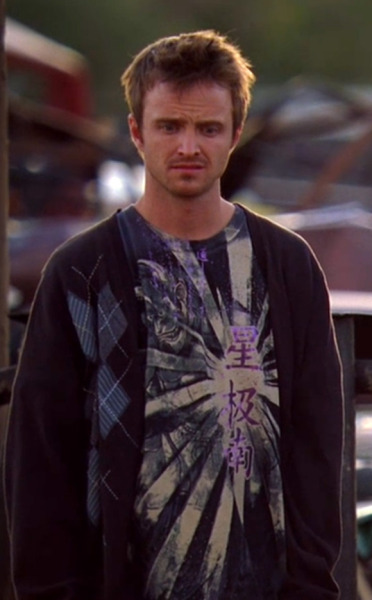 While watching Breaking Bad the other day with my girlfriend we caught sight of something which we love to come across: Chinese characters. This is something you see from time to time in American television and movies, and almost without exception, it is inaccurate or completely nonsensical Chinese.

In this case, the characters appeared on Jesse Pinkman’s t-shirt. From top to bottom they read: ???

Here’s what these characters mean:

Together they mean nothing because on the shirt they are written backwards. The correct order is ???, which means South Star (the precise astrological terminology is Polaris Australis – here’s a description in Chinese).

When trying to figure out what the nonsensical phrase on the shirt means, we searched for it on Baidu, China’s Google. The first result was this post on ????, one of the most popular message boards on the Chinese internet, which is below, translated:

Thread title: Oh my god! Guys, look at what I found. Made in China?

Original post: I searched for this clothing brand and couldn’t find anything – is this made in Shenzhen

Reply #2: Foreigners seem to really like Chinese characters, but they don’t understand them. I once saw a soccer player with a tattoo on his arm that said sweet and sour duck in Chinese.