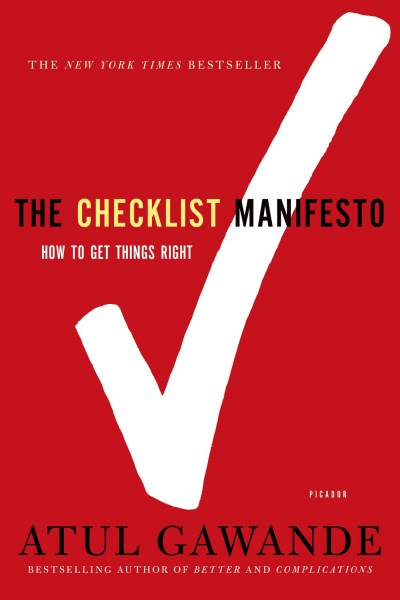 The title of this book is deceptively simple – The Checklist Manifesto is not merely about lists. In the words of the author, “just ticking boxes is not the ultimate goal here. Embracing a culture of discipline is.”

The author of this book, Atul Gawande, is both a best selling author and an award winning surgeon who has single handedly saved thousands of lives. But not just through surgery – through policies that he has championed within the W.H.O., Harvard Medical School, and the United Nations. While working at Johns Hopkins in 2001 he created and implemented a 5-point checklist for surgeons which virtually eradicated central line infections in the ICU (which until then had been a routine complication). The checklist spread throughout medical communities across the country and then in 2008 was adopted as the Surgical Safety Checklist, also written by Gawande.

The premise of The Checklist Manifesto is that doctors, like everyone, overlook and omit steps in routine tasks. In the case of hospitals, these omission result in infections and deaths. It’s not that we don’t have the knowledge to prevent these mistakes, it’s that we are inept in their consistent application. The book describes what checklists are capable of doing, what they aren’t, and how to implement them in ways that benefit everyone from surgeons to pilots to auto mechanics.

The volume and complexity of what we know has exceeded our individual ability to deliver its benefits correctly, safely, or reliably. Knowledge has both saved us and burdened us.

Most of the stories about implementing checklists described in the book are about medicine, since Gawande is a surgeon. And the field of medicine has become what Gawande describes as the art of managing extreme complexity, which you can see by preventable infection being a routine complication in even the best medical centers in the country.

Over 90,000 people go into Intensive Care Units every day so even a marginal reduction in the rate of complications like infections and mis-diagnoses can save many lives. Checklists designed to address those problems have vastly reduced the rate of incident in many sectors like medicine, aviation and construction.

One memorable story in the book is about 1980’s rock star David Lee Roth. There’s a well known story of him demanding a bowl of M&M’s in his green room of every performance with all of the brown M&M’s removed. If he found a single brown M&M in the bowl, he would have a fit and refuse to perform. 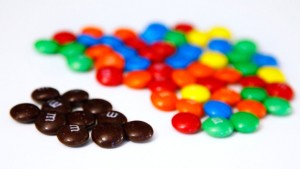 The story is often interpreted as Roth being a wacky, self-absorbed superstar but Gawande argues that it is misunderstood: David Lee Roth had a list. He put the bizarre M&M clause in his performance rider to reveal which promoters are not attentive. The thinking is that if the promoter can’t get the M&M’s right, what other mistakes are being made? Maybe there were other details missed, like weight requirements of the stage rig which could cause a dangerous collapse.

“The fear people have about the idea of adherence to protocol is rigidity. They imagine mindless automatons, heads down in a checklist, incapable of looking out their windshield and coping with the real world in front of them. But what you find, when a checklist is well made, is exactly the opposite. The checklist gets the dumb stuff out of the way, the routines your brain shouldn’t have to occupy itself with (Are the elevator controls set? Did the patient get her antibiotics on time? Did the managers sell all their shares? Is everyone on the same page here?), and lets it rise above to focus on the hard stuff (Where should we land?).”

“We don’t like checklists. They can be painstaking. They’re not much fun. But I don’t think the issue here is mere laziness. There’s something deeper, more visceral going on when people walk away not only from saving lives but from making money. It somehow feels beneath us to use a checklist, an embarrassment. It runs counter to deeply held beliefs about how the truly great among us— those we aspire to be— handle situations of high stakes and complexity. The truly great are daring. They improvise. They do not have protocols and checklists. Maybe our idea of heroism needs updating.”

“The checklist cannot be lengthy. A rule of thumb some use is to keep it to between five and nine items, which is the limit of working memory.”

“We need a different strategy for overcoming failure, one that builds on experience and takes advantage of the knowledge people have but somehow also makes up for our inevitable human inadequacies. And there is such a strategy— though it will seem almost ridiculous in its simplicity, maybe even crazy to those of us who have spent years carefully developing ever more advanced skills and technologies. It is a checklist.”

“You want people to make sure to get the stupid stuff right. Yet you also want to leave room for craft and judgment and the ability to respond to unexpected difficulties that arise along the way.”

The subject of checklists seems dry on the surface, but the psychology of its effectiveness is described in fascinating detail in this book. I’m already keeping daily task lists, but this has made me consider how I can re-think a lot of multi-step processes. Things like writing, recording podcasts, and completing a wide range of work tasks. I recommend this book, and based on how good this book was, am seriously considering reading Gawande’s other award-winning book: Better: A Surgeon’s Notes on Performance.

The Checklist Manifesto on Amazon